We want to help you and your business achieve great success.
Thursday, August 18, 2022 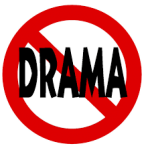 Have you noticed all the drama that surrounds us on a daily – no hourly– basis? It’s tiring and sometimes irritating, though sometimes fun! Watch for it. It’s on Facebook, Twitter and elsewhere, and it appears in many conversations.

Something happens. An expected shipment doesn’t arrive on time. A call is made to the business by the customer. A rant ensues. Perhaps a refund is made, or the entire order is reshipped. The customer still isn’t happy and begins to vilify the business on social media and to anyone who will listen. Charges are made about the business owner. “He doesn’t care about his customers!” “He isn’t professional!” The business owner reacts to having lost money and blames the customer for being unreasonable. Each tries to outdo the other with escalating finger pointing and tirades. The drama intensifies.

How can we STOP the damn drama?

This business marriage will end in divorce if the parties don’t stop the drama and blaming. I’ve often coached my clients on ways to salvage the relationships that are caught up in the drama performance.

One practice that’s helpful is to look closely at the situation. Without emotion, tell the story as if you were a reporter. Care about people and provide the help that feels right. Make sure that neither party feels victimized by the suggested solution. Ask questions to involve the other party in the solution. Agreement is the goal. In the long run it’s so much better to reach agreement.

If you’re addicted to drama, you might miss the snarling and performance, but you’ll learn to enjoy the peace and healthier relationships. Integrity is worth the trade-off.

Latest from the Blog